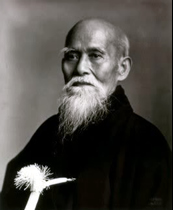 Aikido is a modern martial art founded by Morihei Ueshiba now referred to as O-sensei (meaning great teacher). Aikido empty-hand techniques come from a number of ju-jutsu styles, and in particular, Daito-Ryu Aiki Ju-Jutsu, the style that had the most influence on O-sensei. But O-sensei’s Aikido was far beyond Daito-Ryu, as many anecdotes and stories will attest. Everything that O-sensei came into contact with eventually influenced him in his development of Aikido as we know it today, but it is known that he studied the following styles of Ju-Jutsu: Takenouchi Ryu, Kito Ryu, Tenjin Shinyo Ryu, Shinkage Ryu (which includes a broad range of weapons and empty-hand techniques), and Yagyu Ryu (which also includes a famous sword style). He also studied modern gymnastics, karate, Judo and Kendo. It seems that he took all the best parts from many martial arts and rolled them into one creating something unique.

© 2016 All Rights Reserved | Powered by WordPress | Made with ❤ by Themely